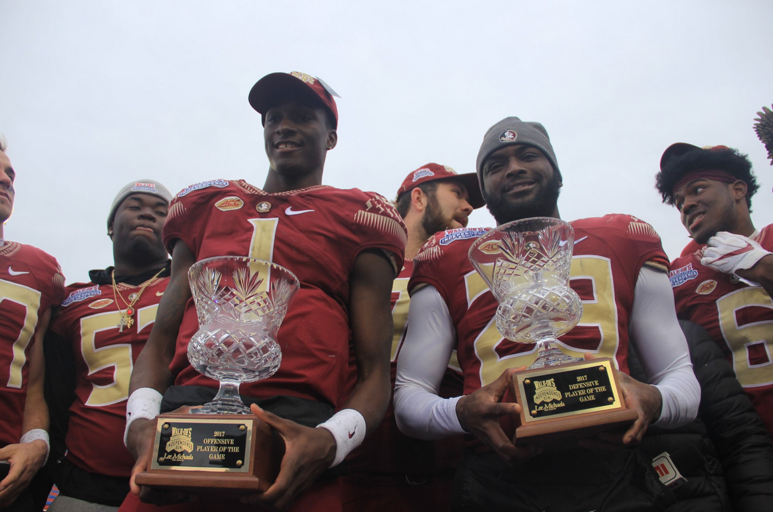 In its first appearance in the Walk-On’s Independence Bowl, Florida State topped Southern Miss, 42-13, behind a record-setting performance from freshman quarterback James Blackman.

The Seminoles (7-6), led by the combination of Blackman – the Offensive Player of the Game – and wide receiver Auden Tate, found a rhythm early, as they connected on the first of three touchdowns on their opening drive of the game. Blackman finished the game 18-26 for 233 yards and four touchdowns with no interceptions.

“James, being an 18-year-old kid, coming to Florida State, starting for 12 games, that’s a lot of pressure,” interim head coach Odell Haggins said. “These players put their arms around him. Even though James made a few mistakes, they picked him back up. That says a lot about his character. He’s a fighter. He’s a ‘Nole.”

The combination of freshman running back Cam Akers’ 94 yards rushing and one receiving touchdown and junior running back Jacques Patrick’s 61 yards and a touchdown, helped deliver a balanced offensive attack.

Senior safety Nate Andrews took home the Defensive Player of the Game Award, with six tackles (five solo) and a pass break-up. The Seminoles held Southern Miss to 260 yards of total offense, getting constant pressure in the backfield with seven tackles for loss.

Southern Miss (8-5) started the scoring on its opening drive on a five-yard touchdown scramble from quarterback Kwadra Griggs. Griggs finished 13-25 for 86 yards and a touchdown, with 39 yards rushing.

“There is always critical plays in a game and I thought our guys fought hard,” coach Jay Hopson said. “We were hoping the ball would bounce a little better today than it did. But at the end of the day, there were a lot of positives that came out of the game.”

Defensively for the Golden Eagles, Tarvarius Moore led all defenders with 14 total tackles (11 solo) with one tackle for loss and a pass broken up. Racheem Boothe finished with nine tackles.

Florida State became the 11th Atlantic Coast Conference representative in the Walk-On’s Independence Bowl, and with the victory, evened the conference’s all-time record at 5-5-1.