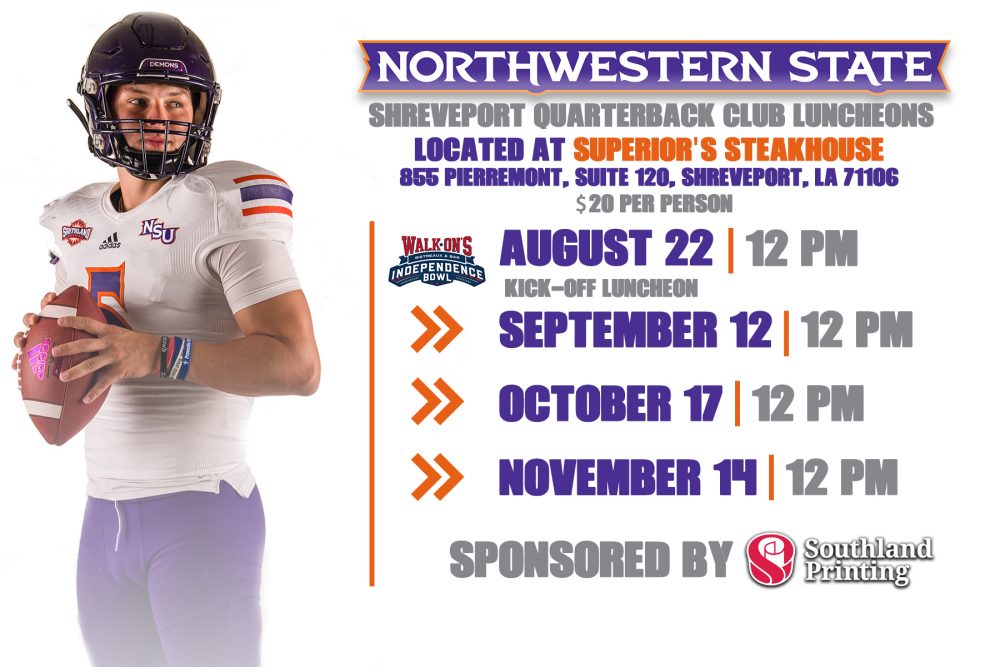 A tradition in its 24th year, the annual Independence Bowl Foundation/Northwestern State Football Kickoff Luncheon is set for Thursday, August 22 at 11:45 a.m. at Superior’s Steakhouse in Shreveport.

Reservations for the annual luncheon are being accepted now and can be made by contacting the Walk-On’s Independence Bowl office at 318.221.0712 or toll free at 888.414.BOWL. The all-inclusive price for the lunch is $20, which includes salad, bread, plated meal and dessert. Attendees are asked to bring cash or check to the event.

The event falls one week before the Demons begin their 2019 season with an August 29 matchup at UT Martin. As is custom, head coach Brad Laird and Director of Athletics Greg Burke will address the crowd, which is nearing its 25th anniversary. Burke’s first public function as Northwestern State’s AD was the inaugural 1996 Independence Bowl/NSU Kickoff Luncheon. Walk-On’s Independence Bowl staff and Independence Bowl Foundation leadership will also be on hand to talk about bowl updates and the season of events.

“This event always signals the fact football season is approaching and serves as a rallying point in a market that has a high volume of ardent Demon supporters,” said Burke, who begins his 24th year in charge of NSU athletics. “NSU continues to be appreciative of (Walk-On’s Independence Bowl Executive Director) Missy Setters and the Independence Bowl Executive Committee for continuing to provide this opportunity to promote the upcoming season.”

Laird echoed Burke’s thoughts about the importance of both relationships with the Shreveport area and the bowl itself.

“The Shreveport area and NSU share a long-standing relationship, one we respect and will continue to nurture,” Laird said. “We feel the same way about what we have built with the Walk-On’s Independence Bowl. The Kickoff Luncheon is something we always look forward to, because of our friendship with the people at the bowl office. It serves as a tremendous way to kick off both of our seasons.”