The Radiance Technologies Independence Bowl’s is college football’s 11th oldest bowl game and its rich history spans across six different decades. Established in 1976, the Independence Bowl received its name because of the nation’s bicentennial celebration. Throughout the first 45 editions of the game, 73 First Round NFL Draft selections; six Pro Football Hall of Fame inductees – including 2021 inductee Alan Faneca; 23 College Football Hall of Famers – including 2022 inductees Kevin Faulk, Roy Williams and Gary Pinkel; and seven National Championship-winning coaches have participated in the Independence Bowl. 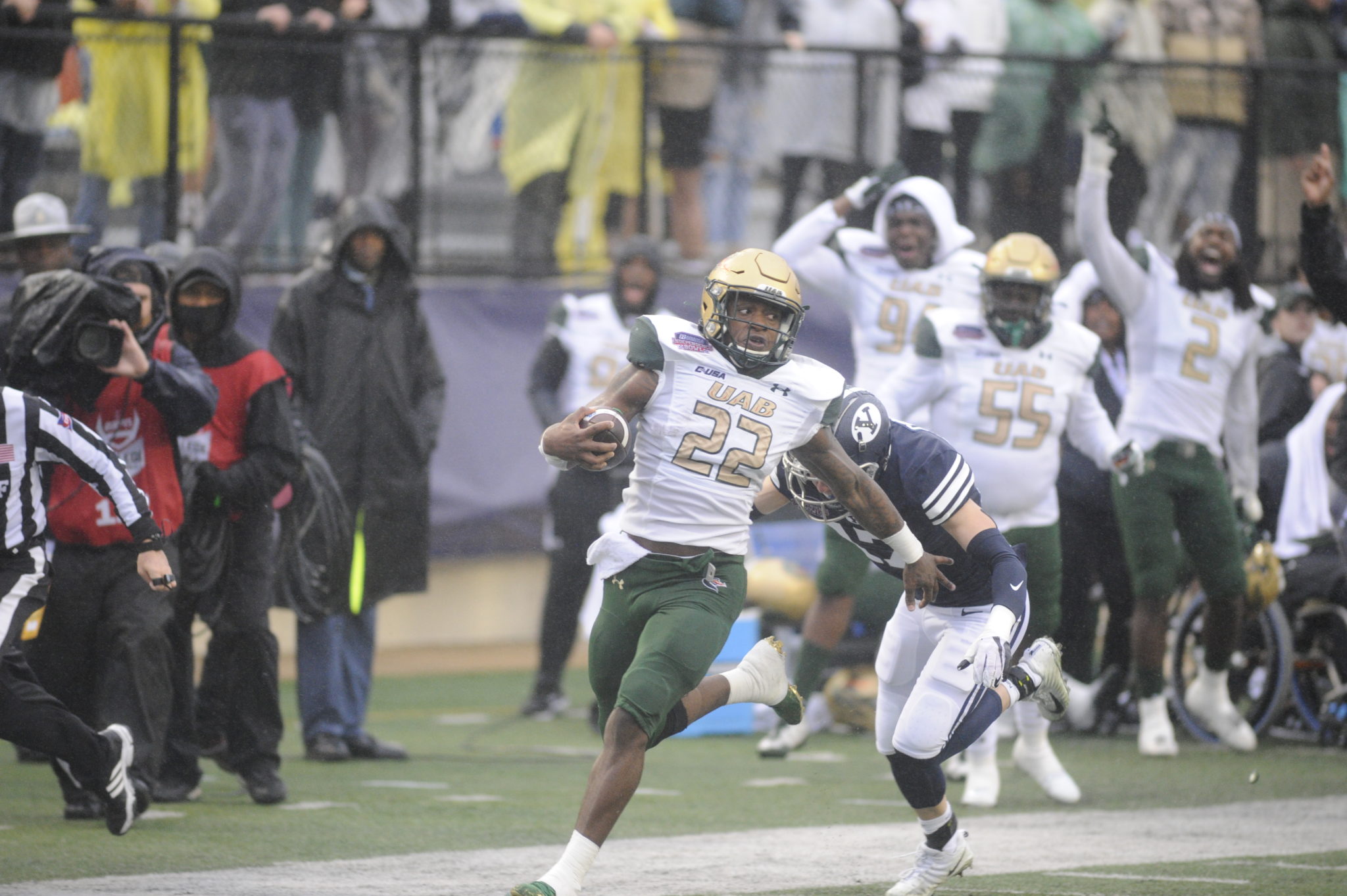 On a rainy and windy Saturday, the 45th Radiance Technologies Independence Bowl turned in one of its finest games in a back-and-forth battle between the UAB Blazers and BYU Cougars. In what was one of the biggest victories in program history, UAB defeated No. 13 BYU 31-28 to earn their second bowl win in program history and first Independence Bowl victory. Two of the top running backs in the nation dueled on Saturday, as UAB’s DeWayne McBride finished the day with 28 carries for 183 yards and one touchdown. BYU’s Tyler Allgeier compiled 192 yards and three touchdowns on 27 carries. UAB QB Dylan Hopkins completed an Independence Bowl record 83 percent of his passes for 183 yards and three passing touchdowns. 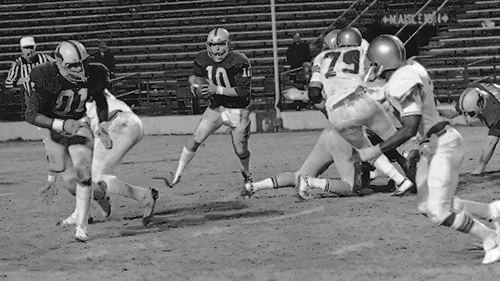 During the early years of the Independence Bowl, the Southland Conference – now at the NCAA FCS level – provided their conference champion as the host for the event. McNeese State captured the Southland Conference crown and squared off against the University of Tulsa. A touchdown run with 37 seconds left from McNeese’s Oliver Hadnot delivered the Cowboys of McNeese a 20-16 victory over the Tulsa Golden Hurricanes. A crowd of 19,164 fans watched the inaugural game in the stadium named after the Independence Bowl. 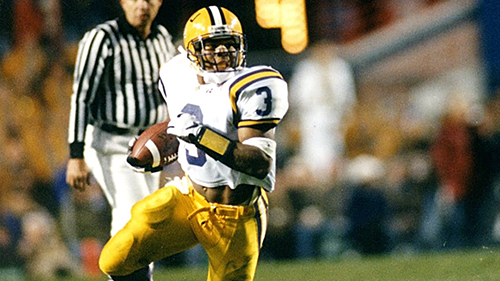 The Independence Bowl realized a dream come true as the Tigers of LSU invaded Shreveport to take on the Michigan State Spartans. With the first sellout in bowl history, 48,835 fans watched as 21 points were scored in 26 seconds of play during the first half, including back-to-back kickoff return touchdowns from LSU’s Eddie Kennison and Michigan State’s Derrick Mason. The Tigers came away with the 45-26 victory, and Shreveport-Bossier City, along with the LSU Tigers, bridged the gap between northern and southern Louisiana. 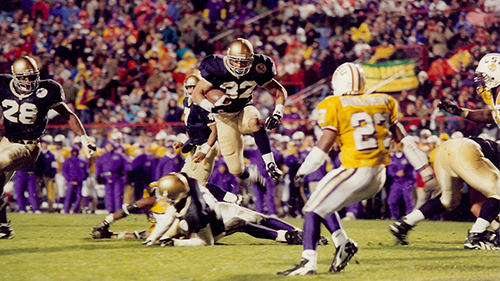 The 22nd Independence Bowl marked two milestones, with an attendance record of 50,459 that still stands today, and the final year with Poulan/Weed Eater as the title sponsor. Notre Dame jumped out to an early lead and found themselves on top 6-3 at the half, but the second half was almost all LSU. Tiger running back Rondell Mealey broke several personal and I-Bowl records with 222 yards rushing and two touchdowns. Shreveport’s own Abram Booty added one touchdown, as the Tigers rolled to a 27-9 victory. 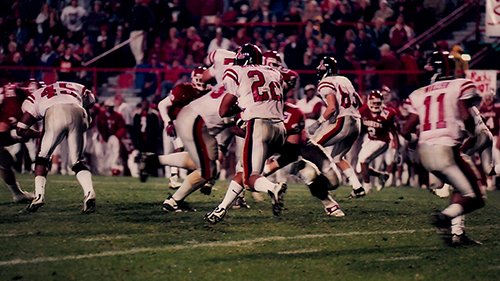 Ole Miss upset Oklahoma as the “Deuce ran loose,” featuring the longest touchdown run in Independence Bowl history from Ole Miss’ Deuce McAllister (80 yards). The Rebels held the lead for most of the night, and after Oklahoma took thier first lead of the game in the fourth quarter, Ole Miss kicked a field goal in the final seconds to secure the 27-25 victory. The victory was Ole Miss head coach David Cutcliffe’s second in two years and was over an Oklahoma team that would win the National Championship the next year.

The 25th Independence Bowl went down in history as the “Snow Bowl,” as a blizzard hit Shreveport during pre-game warmups. This was a matchup of traditional SEC and Big 12 powers, Mississippi State and Texas A&M. The game went to overtime, when Texas A&M running back Ja’Mar Toombs scored a touchdown, but the extra point was blocked and returned for two points by Mississippi State. The Bulldogs would score on their overtime possession to win 43-41. 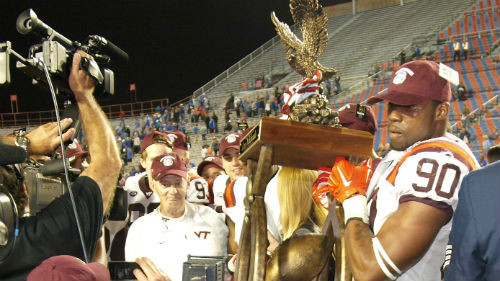 The 40th Anniversary of the I-Bowl turned out to be one of the most memorable, featuring a wild shootout with Virginia Tech sneaking past Tulsa, 55-52. Legendary coach Frank Beamer closed out his career with a victory in the very stadium he won his first bowl game 23 years prior. The teams obliterated the I-Bowl record book, combining for the most points (107), TDs (14), rushing touchdowns (9), yards (1,161), most points scored in a quarter (45). 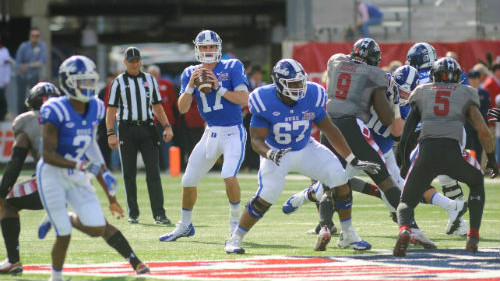 The Duke Blue Devils rolled over the Temple Owls 56-27 in the 43rd Independence Bowl to bring  David Cutcliffe’s I-Bowl record to 4-0. The Owls led 27-21 at halftime, but the Blue Devils stormed back with an I-Bowl record 35 second half points. Duke set the record for most points in an I-Bowl, while Jones set I-Bowl records for passing yards (423), passing touchdowns (5) and total touchdowns (6), and Rahming set the record for receiving yards (240) and all-purpose yards (286). 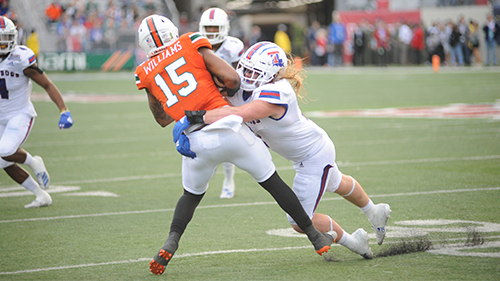 The in-state Louisiana Tech Bulldogs recorded the first shutout in Independence Bowl history, blanking the Miami Hurricanes 14-0 in the 44th playing of the Independence Bowl. The two teams combined for an I-Bowl record 18 punts for 751 yards, while the two offenses managed just 564 combined yards of total offense. With nine punts each, both punters – Miami’s Lou Hedley and Tech’s Brady Farlow – set a new I-Bowl record for punts in a game. The win brought Tech’s I-Bowl record to 3-1-1 all-time.

The Sports Foundation gained certification for the Independence Bowl game from the NCAA on its first try. The Southland Conference champion served as the host team. The first game matching McNeese State and the University of Tulsa had a budget of $75,000 and paid each participating team $25,000, drawing 19,164 fans.

The Independence Bowl pursued and achieved open-ended status on both sides ending the affiliation with the Southland Conference. Texas A&M from the Southwest Conference defeated Jimmy Johnson’s Oklahoma State Cowboys from the Big Eight, 33-16.

Poulan/Weed Eater signed on as the game’s first title sponsor in 1990.

The 1992 match-up between Wake Forest and Oregon marked the first Independence Bowl to be shown on ESPN.

The Poulan/Weed Eater Independence Bowl reached an agreement with the Southeastern Conference to secure the fifth choice from that prestigious conference.

The Bowl had its best-case scenario as local favorite LSU was selected to play Notre Dame in Independence Bowl XXII.

Independence Bowl officials reached a three-year agreement with the Big 12 for that conference to provide a team to the post-season game.

The partnership with the Southeastern Conference was extended through 2001.

On January 10 of 2001, MainStay signed on as the newest title sponsor of the Independence Bowl. The subsidiary of New York Life signed an agreement that extended through the 2003 game.

Agreements with both the Big 12 and Southeastern Conferences were renewed through the 2009 season.

On Thursday, May 21 of 2009 Independence Bowl officials announced AdvoCare as the fifth title sponsor in the bowl’s 34-year history.

Beginning in 2010 the Independence Bowl matched up teams from the Atlantic Coast Conference and the Mountain West Conference. Those partnerships ran through the 2011 season.

In 2012, the Independence Bowl announced it resumed partnership with the Southeastern Conference. The matchup with a team from the SEC and a team from the Atlantic Coast Conference ran through the 2013 season.

The Independence Bowl Foundation signed a three-year agreement with Baton Rouge-based Walk-On’s Bistreaux and Bar as title sponsor. During the 3-year sponsorship, the number of Walk-On’s Bistreaux & Bar restaurant franchises exploded from 13 to over 50.

The Independence Bowl Foundation announced new primary conference and team agreements in January of 2020. The new agreements bring a rotation of independents Army West Point and Brigham Young University to Shreveport to face off against a rotation of the Pac-12, American Athletic Conference and Conference USA. The 2021 Radiance Technologies Independence Bowl will feature a matchup of BYU vs. C-USA.

The Independence Bowl Foundation announced a guaranteed five-year partnership with prime contractor Radiance Technologies in 2020, and the two organizations agreed to a one-year extension in 2021 – extending the partnership through 2025. The partnership bridged together Radiance Technologies, who work extensively with the U.S. Military, with the Bowl that was named after the nation’s bicentennial and that will feature Army West Point football three times in the next six years.